Adminisztrátor For non-Hungarian speakers Food around the world 0

Well, as expected, India was indeed the Heaven of vegetarian dishes. We were touched almost to tears when we first encounter the term “non-veg” (not vegetarian) for the foods, because in this country eating is approached from a different perspective. All foods and restaurants are vegetarian, or “pure veg” (clean vegetarian, no eggs), and there are restaurants where non vegetarian dishes can also be found, but there are very little of this kind, depending on how many western tourists and on the religion of the majority of the people living in the given state. It’s interesting how despite the fact that many people believe that Indians are vegetarians because of religious purposes, this is not the main reason… this is simply what they are used to, given that is cheaper, they love Indian food, and combine all the delicious vegetables in such a way that they don’t even consider consuming anything else. We didn’t really meet any Indian that really longed for western foods…but all being said, by the end of the second month we had enough of curry and naan.

Dóri learned how to cook many dishes, she was always in the kitchen when someone was cooking, and thankfully, we had the chance to get accommodation at many families and friends… on top of that, in India everyone cooks. Despite the fact that we -especially Dóri – don’t like spicy foods a lot, we didn’t have problems dining in India… we got used to it after Mexico and six months in Asia, but we also realised that the saying that indians are preparing the food spicy even when they are asked not to do so, is not true. This was the first country, in our trip, where we ate streetfood, even though just once, and, thank God, we did not get ill. This is an achievement for us, because none of our acquintances that went to India succeded to not get ill there.

But what did we eat? ( For some reason, unfortunately, maybe because every single dish presented for us made us extremly happy, we forgot to take pictures, thus we can only show a few dishes. )

The first food experience…pretty spicy…was on the plane to Delhi: 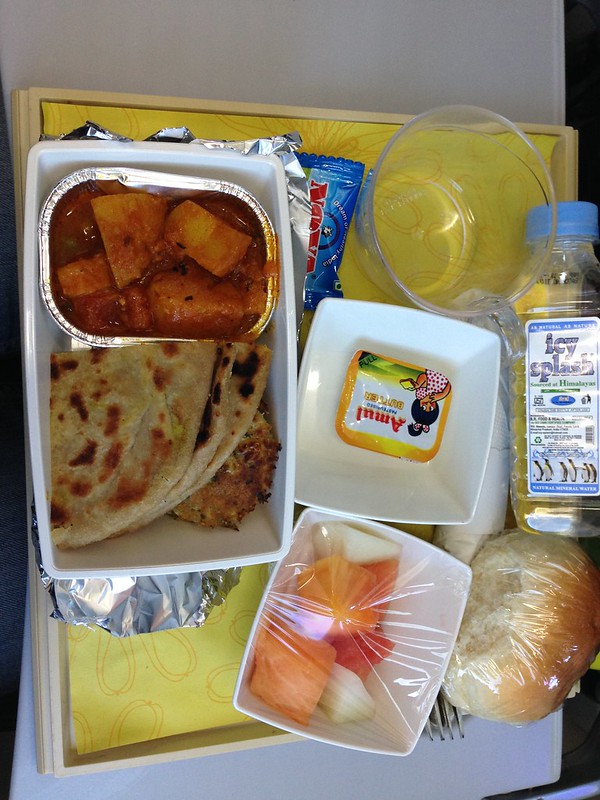 Indians, as asians in general, really like snacks. We happily consumed the following two on our train trips. Moong dal- a lentils snack, khatta meetha- rice, seeds and a mixture of other things, slighty lemony.

But there are snacks that are consumed only on special occasions. For example this dish was eaten on the morning of holi (and no it’s not popcorn ;-))

Hardik’s father brought us this food, one afternoon, it’s cooked on the streets, and it is similar to  csöröge fánk.

Something that we ate very often: all kinds of dairy… the youghurt, curd, lassi, were very tasty, and, to Dóri’s delight, the icecream too, so that we ate until our throats got sore. We tried all kinds of flavoured icecreams, but the most intresting was the thandai flavour…well, who knows what that is?

Dairy helped us not get ill, because from the first day we dined like the locals… insipte of the fact that Lonely Planet (a travel book) warned us that we should keep ourselves from consuming dairy, we learned in India that the order in which one consumes the dishes is very important. First of all, some „pappadam” (crunchy Indian bread)

Then curry dish with naan and chapati (Indian breads), of course consumed with the hands, then dal (lentils) with rice, and lastly some curd (it is most similar to kefir.)

In restaurants a menu is presented the following way, and contains the above mentioned foods.

In India there is a big difference between the cuisine of different regions, but in general it is true that in the north more bread is consumed, and the foods are spicier, while in the south everything is consumed with rice, and a lot of „dasa” ( bread made of rice flour, like a pancake), on the beaches fish is also consumed.

We only realised how many types of rice and banana there are when we got to a market in Kerala. These men are selling only rice, the other only bananas:

We were lucky enough in that region, and got accomodation at a family where the lifestyle rules of M. Gandhi were strictly respected, one of which rules was the pure vegetarian diet. Here  Dóri learnt the secrets of making chapati and other foods. As you can see in the picture, always, everything is made in a pressure- cooker.

Naturally, we consumed it while the sitting on the ground.

Naan and chapati with vegetables or paneeral (indian cheese) cooked in different kinds of souces.

Noodles and rice with vegatables:

As we already mentioned, we tried the street food only once…we don’t know what it was, nor will we tell you how many flies landed on the bowl in which it was prepared, but we were extremly hougry, and we could’t find another dining place on our way from the desert to the city.

In the mountains we cooked every evening with the Waste Warriors boys:

Dóri invented a new pottage recipe in India… we tried cooking our indian friends something truly Hungarian, but unfortunately, apart from the poatatoes we couldn’t find anything for it… in the end Dóri got very creative, and made a very tasty indian version, which we served with French toast.

The best and most special food related experience from India was without doubt in Amritsar, where we dinned with a few hundred  sikh believers in the church of the religion:

In left bottom picture volunteers are peeling garlic for the dinner.

Watch a short video here to catch the feeling:

In the north we had Tibetan momo, and this bigger, folded and fried version of it, and we tried out some sweets too, out of which the coconut rice roll with bananas was our favourite.

Lastly, if you missed them so far, we also tried out some fruit, but unfortunately the real fruit season only began after we left. This was the most special that we have tasted, but we unfortunatelly forgot its name… we first got it from a young girl on a bus.